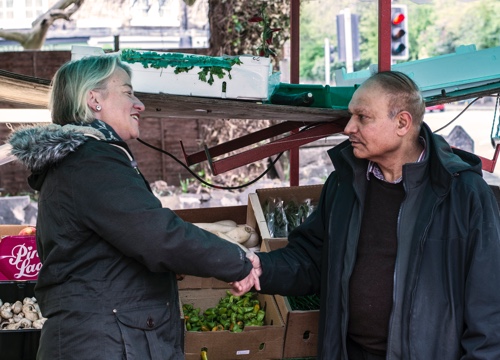 Darren Burke, in Steel Life Portrait (Sheffield Telegraph), reflects on the small chain supermarkets “that have spread along our high streets like a rash in recent years.”

I was travelling up Barber Road, Crookesmoor, last week, and traffic was inexplicably at a standstill.  Inexplicably that was, until I spotted the large lorry parked outside Sainsbury’s.

Cars and buses were weaving in single file past it, while pedestrians dashed through the mêlée.

It was a demonstration of their impact that small, independent businesses had been complaining to me about just the previous week.  Their deliveries come in small vans, but the chains use bigger lorries that draw up four or five times a day, often parking illegally for long periods in the process.  There is no significant on-site storage space in most of their “local” branches.

This makes it hard for small independents to compete with them, disrupts the business of independent shops around them, adds to congestion and air pollution and threatens the safety of road users.

Supermarket chains can walk into old pubs using a planning loophole.  Their whole business model is built on flouting parking rules, yet they’re allowed to continue to hollow out our high streets, damaging our economy here in Sheffield.