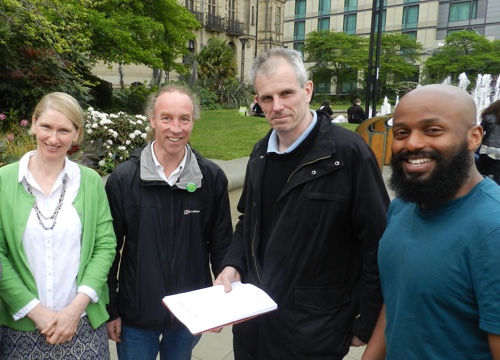 Sheffield Green Party welcomes plans to make council meetings shorter but objects to proposals from the Labour Group that reduce the chance for Opposition parties to have their say.

Proposals, outlined at September’ meeting, are to limit the number of motions on the agenda.  At present, the Council’s constitution allows any councillors to put forward motions but the effect of the new proposals is to stop the Green councillors putting any motions at all to the September council meeting.

“The council is being asked to vote on limiting motions to no more than four. Two of these are reserved for Labour – originally they wanted three – so this stops all opposition groups from being able to put forward their own motions.

“This has a far bigger impact on opposition groups who have much less opportunity to set out their alternative ideas for how the council should run.

“Although there will be more discussions before the constitution is formally changed, we think the Administration has a duty to be open and clear about the effect of their proposals.

“Opposition councillors have a crucial role in scrutinising the ruling Administration and must object to attempts to close this down.”

“I am concerned the new meeting format will limit the councillors’ and public’s opportunities for exploring alternative visions for Sheffield.

“A far better way to increase public engagement in council meetings is to support the Greens’ long-standing call to broadcast meetings online so that everyone can see what is being said in the name of the people of Sheffield.”

1. The council agenda is at http://democracy.sheffield.gov.uk/ieListDocuments.aspx?MId=6691

Importance of constitution
That this council

3. The Administration’s publicity for the changes is at: http://www.sheffieldnewsroom.co.uk/councilmeetings/

There are 2 Responses to Greens oppose limits on local democracy

The present Labour Administration appears to be behaving like a Stalinist dictatorship. Just at a time when we desperately need wise compassionate leadership. I am beyond disillusioned and dismayed.

Agree. Labour are authoritarian. It is frightening what lengths the are prepared to go to.