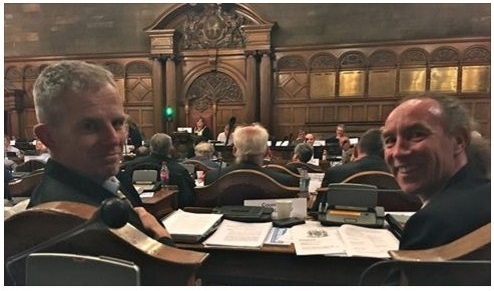 November’s council meeting was a quiet one for Alison Teal, who sat through the whole meeting without making a speech.  Maybe it was just good to know she wasn’t in prison and didn’t get thrown out of the meeting. A number of questions from the public asked the council to explain various decisions around the council’s application to the High Court to have her imprisoned and the court’s rejection of it.  In response, Cllr Bryan Lodge confirmed that the council “accepts the words of Mr Justice Males” but that he was “pleased Cllr Teal has been to court.” There was however, absolutely no recognition of just how bad it looks in 21st Century Britain to try to jail your political opponents.

Earlier in the meeting, the Council had agreed unanimously to remove the Freedom of the City from Aung San Suu Kyi, which had been granted on International Women’s Day in 2006 for “commitment to secure democracy and human rights by non-violent means.”

Labour’ decision to suspend the constitution meant we had not been permitted to put even one motion forward this month.  Rob Murphy proposed an emergency motion to call for an independent inquiry into the failed case against Alison Teal but this was request was rejected by the Lord Mayor, to cries of “shame” from the public gallery.

Instead the meeting debated issues of national policy rather than anything much to do with Sheffield. We had issues about charges for service in the NHS, universal credit and a round-up of national housing policy issues. None of this had any particular relevance to Sheffield any more than for any other town or city.

We moved a formal amendment to say there should be “no place for private profit in NHS hospital services.”  Both Labour and LibDems revealed their true colours by opposing this. We have to remember that both those parties have been complicit in bringing the market into the health service during their terms in government.

We commented on the universal credit motion by saying it was not enough for Labour just to “note” these issues. We said the Administration should draw up an action plan to protect Sheffield’s citizens from the full roll-out of Universal Credit.  That too was rejected by Labour.  Heaven forbid they should actually use the Council’s resources to limit the hardships facing our residents!

On the LibDems’ transport motion, Rob Murphy commented that when money is so tight, road safety has to be a priority.  The recent 20mph zone in the city centre is where the most road accidents are. However, he noted that, with the Amey contract, the cost of doing road improvements has gone through the roof.

We had at least had some success with Members’ Questions. These are written questions submitted by councillors a week before the meeting and with written answers given at the meeting. Councillors can then ask supplementary questions. It’s not quite Prime Minister’s Questions but it is a very important way for the Opposition to call the Labour Administration to account.  As part of suspending the constitution, Labour had moved these to the end of the meeting so that there was no time to ask extra questions. For this meeting, however, they were brought to follow on from public questions.

We asked questions about fire safety in tower blocks (still waiting for an answer), Sunny Bank meeting rooms, the deal for the Central Library, volunteer libraries, pension fund investments, output under the Streets Ahead contract – and leafblowers. Amey have 38 apparently.

We also asked “urgent questions” asking for a comment from the Leader of the Council on the court’s decision to refuse the application to commit Cllr Alison Teal to prison. We were refused permission to ask the questions on the grounds it was not ‘urgent.’ The meeting then ended early for once.

There is One Response to November’s Council Report

Thank you again Douglas. This should be reported and published across all media in the region as a matter of course.
Perhaps there is stuff happening that the present establishment don’t want broadcast.
Hopefully this continues.
(What would be the reaction of a Momentum member to this report?)