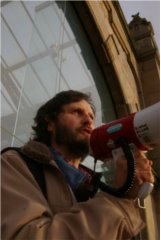 The Green Party is supporting calls from Residents Against Station Closure to
the Council to turn down an application by East Midlands Trains to install
station gates which will block access through the station.

Local Green Party activist Graham Wroe disputes claims from East Midland Trains that because the station is currently in their hands they have the right to restrict access.

Mr Wroe said,”The bridge connecting the platforms of Sheffield station was
funded with public money and creates a link between the city centre and Park
Hill tram stop and neighbourhoods such as Park Hill and Norfolk Park. This
proposal will  would mean that local residents will would have a much longer
journey to the city centre.

“EMT should not be allowed to effectively privatise what has been traditionally used as an important pedestrian route. If the railways were brought back into public ownership, this dispute with a private company would not arise.”

Residents say there are safety fears about using other routes into the city
centre and the Greens are concerned that more local people will resort to
using cars to get into the city.

Council officers are recommending refusal as the scheme would spoil the
character of the historic station building with its elegant arches, and cause
accessibility problems for disabled people.  There has also been massive public pressure against the scheme.

Earlier this year members of Residents Against Station Closure held a public
protests against these plans at the station which over a hundred people
attended. RASC have mobilised over 1200 people to formally object to the plans, including South Yorkshire Passenger Transport Executive, Transport 4 All, the Civic Trust, Sheffield College, Urban Splash, Friends of the Earth and many more.

A similar campaign led by the Green party was held by residents in York and
successfully protected public access to York train station.