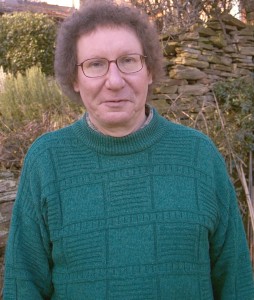 It is with great sadness that Sheffield Green Party announce the death of Mervyn Smith.

The funeral was on  Monday 21st Dec at 3 p.m. at Hutcliffe Wood Crematorium .

He leaves a widow Nicola and two daughters, Rachel and Helen.        They  have  asked for no flowers but are collecting donations to the local Leukaemia and Blood Disorders research charity – details available at the funeral or from Nicola.

Mervyn was a committed cycle campaigner, and was very involved with Pedal Pushers, (now renamed Cycle Sheffield). He was always at the forefront of the latest cycling developments, and loved improving his bike to make it efficient as possible.

He took his responsibilities to the planet extremely seriously, and went to great lengths to ensure his house was as well insulated as possible. He was one of the first people in Sheffield to invest in solar panels. He often opened his house to educate people about energy efficiency, and certainly inspired me to go ahead with our eco-renovation. He showed that it is possible to convert traditional old Sheffield houses to make them much more energy efficient.

He first stood in local elections in 1998, in Sharrow Ward, where he secured 149 votes, 7% of the total. Little did he know then that this ward would become Central Ward, where we now have 3 Green Councillors. In 1999 he stood in Nether Edge, beating the Tory with 252 votes. He then stood every year, increasing his vote to 1045, 20%. 2008 was to be Mervyns final election.

Mervyn will be sadly missed by us all. We will miss his warmth and friendship, his wealth of knowledge on all things to do with insulation and renewables, his dry sense of humour and dogged persistance in campaigning. Throughout his life he challenged conventional wisdom and showed there was a better way to do things. The planet desperately needs more people like Mervyn.

There are 2 Responses to Mervyn Smith

I am sorry to hear of the loss of Mervyn.
Another good green campaigner and a man I had known and respected for a good number of years.

I agree with Graham about Mervs dry sense of humour…but he was a very amiable man for all that.

My thoughts are with his family and with his friends, particularly green ones, at this sad time.