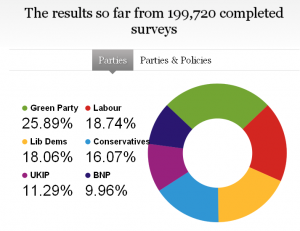 Green Party policies may not have been allowed an airing in the leader
debates but people have been voting for them in numbers online. Independent
website www.voteforpolicies.org.uk surveys opinion according to which
policies people support without initially saying which parties’ policies
they are. Over 179,000 people have voted as I write, and the Greens (26%)
lead by more than 8% over all the other parties, with Labour and the Lib
Dems both on 18%. The vast majority of voters can see the policies of the
main parties aren’t working and Greens offer the real alternatives that
voters are looking for. A good local example is a minimum “living wage”
which Sheffield Council is now working on implementing for its employees
following the passing of our council motion.

The image shows the results up to 28th April 2010, which have changed slightly since the letter was written. There is also now a fascinating page where you can see the parties results for different polcies. Currently the Green Party has the most popular policies for Crime, Education, Environment and Health. We come a strong second on Economy, Europe and Welfare.