Cuts are not an economic inevitability. They are an ideological choice 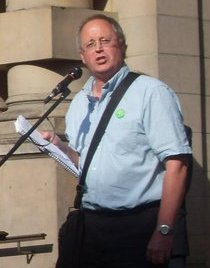 “Cuts to public expenditure are destructive and unnecessary. Quite apart from the immorality of the £76 billion programme for the renewal of Trident……the Green Party yesterday published a report showing that cuts are a callous con-trick…..a con-trick that will increase the chances of plunging us into a depression.

If that money could be collected through the reinstating the tens of thousands of tax inspectors that were sacked…… that money could fund a massive investment in jobs – a Green New Deal that would tackle inequalities. Like the need to build social housing, and the urgent environmental challenges like the need to wean us off our high energy lifestyles.

Let us be clear ….“Cuts are not an economic inevitability. They are an ideological choice…..driven by an unwavering belief in deregulation, the pursuit of ever higher growth rates and free markets.  An ideology that allowed the recent excesses of the banks.

Political choices must be made.  We clearly are not all in this together.  Those who enjoyed the largest benefits must pay up now.  For that to happen, fair taxes, not cuts, must become the new big idea to replace today’s callous and uncaring cuts fanaticism.

A properly funded Green New Deal programme would be a massive labour intensive energy saving programme. It would mean a rapid shift to renewable energy. This would ensure that we come out of the recession better equipped for the future.

“The UK is currently one of the most unequal societies in Europe. We need to apply a 50% tax rate on those earning over £100,000 and help the lowest earners by reintroducing the 10% tax band.

We should not tolerate tax abuse. Fairer tax… not cuts in spending…. must become our cry for social and environmental justice.”