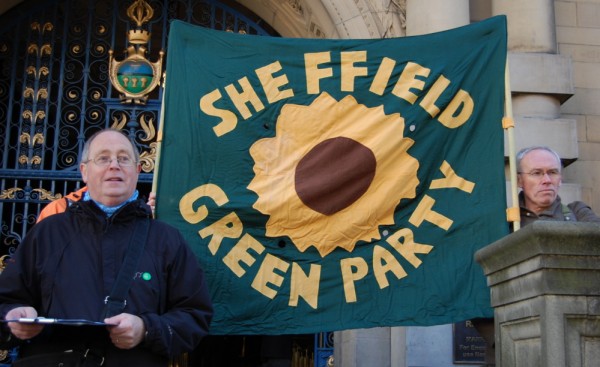 Sheffield Green Party will be joining the march from Sheffield University to the TUC rally at the Town Hall on Saturday October 23rd.

Green Party Cllr Jillian Creasy said, “We support public service workers and all those whose jobs, services and benefits will be affected by these draconian cuts. In Sheffield, we are particularly concerned about the effect on young people, housing and bus services. We have consistently been clear that the cuts are economically disastrous, unnecessary and unfair. As local councillors, we will fight to keep vital services and to continue investing in essential infrastructure and jobs.

“I will be speaking at the university concourse, where students will be adding their voices to the protest. Many of them voted for the Lib Dems and may well feel betrayed by the U-turn on tuition fees.”

Co -Chair Bernard Little added : “The media and most of our politicians tell us that massive cuts are inevitable. It’s not true and a callous con trick. Every year at least 50 billion pounds fails to reach the public purse through non collection of taxes. These cuts are not necessary. We need to remember that well funded public services and paying a living wage are the foundations of a fair society. We need to invest wisely in jobs and infrastructure that will create greater equality and ensure the health and welfare of future generations.

These cuts will leave thousands of poor and vulnerable Sheffielders with little or no hope for the future. That can only worsen the massive health divide in the city in the years to come.”

Green Party leader Caroline Lucas MP has called George Osborne’s comprehensive spending review “a budget to destroy a million jobs”. She said “The worst cuts could have been avoided by an alternative policy based on a fairer tax regime, cutting Trident and investing in job creating renewable technology.”