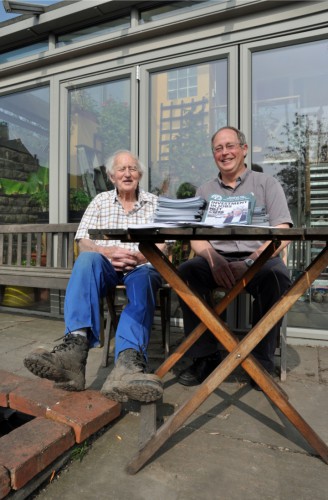 Amyan Macfadyen, who celebrated his 90th birthday in December, is inspiring Sheffield Green Party activists during the election campaign with his tireless work.

Amyan delivered 250 leaflets over five days in the Botanical polling district of Broomhill covering Clarkehouse Rd, Clarke Drive, Clarke Dell, Broomgrove Lane, Broomgrove Road, Southgrove Road and Eastgrove Road.  He then moved on to sticking 4000 address labels on leaflets, pacing himself by doing 500 a day over an 8 day period.

Amyan is a former Professor of Ecology and Environmental Science at the University of Ulster.  He only turned to environmental campaigning after retiring in 1986.  He gave up his car for a bike at the age of 85 when he moved to Sheffield.  Amyan is regularly seen cycling to meetings of Friends of the Earth, Sheffield Campaign for Climate Change and the Green Party. He comments :

“I support the Green Party because I am deeply concerned about the future of my family, the human race, and life on earth.  I am concerned about the destructive effects of our present way of life on resources and on the environment.  I have four children and seven grandchildren who I hope will be around long after I am gone.  I want to do all that I can to make a positive impact on their future lives. ‘

‘Locally, our Green councillors have, over recent years, had a disproportionate effect on improving lives in Sheffield so I am working hard to help them win this election.  Each year it gets tougher but I will keep making a practical contribution for as long as I can. ”

Broomhill candidate Bernard Little comments : “I have been canvassing in that area and a lot of people said they know and are impressed by his dedication and determination.  He is an inspiration to many people and election campaigns are long and tiring for all concerned.  But if  Amyan can keep going so can the rest of us. ”

The picture above shows Amyan putting his feet up for a hard earned rest with Bernard Little.

There are 2 Responses to 90 year old election campaigner

Amyan was always one of my heroes. When I was just feeling my way into soil zoology and ecology, he was there to lead the way.

Hey my name is Amyan too. It’s pronounced like Damian without the d. I wonder how this man’s name is said. Oh and I was born in December too.