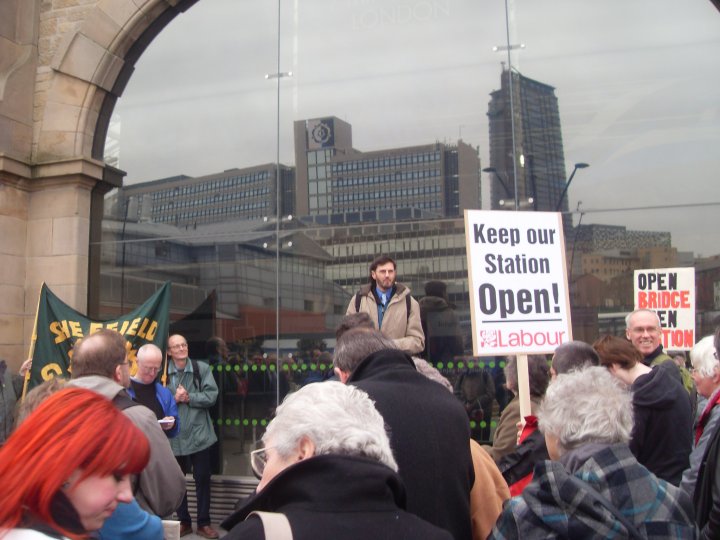 Members of the campaign to keep Sheffield Station bridge open to the public were furious this week when Facebook  removed their group, which had been built up over three years of campaigning and included more than 2200 supporters.
Facebook had given notice that the Group was about to be “archived”, but failed to explain what this meant or when it would happen. Despite desperate attempts to communicate with Facebook, all our emails were ignored.
On Sunday 31st July the group was removed by Facebook, even though it was clearly in use and various posts had been made that week.
Press Officer Graham Wroe explained “The group had been quite quiet over the last six months as East Midlands Trains have stopped impeding pedestrians from crossing the bridge and an article in the Sheffield Star declared that we had won our battle to prevent the station from being gated. However it is now clear that the Transport Minister Philip Hammond is still keen to install barriers at the station, as he has written to Nick Clegg saying this. We are just preparing to gear up our campaigning again and Facebook’s action is an enormous blow to our organisation, as we need to be able to communicate with our supporters. I wonder if Facebook’s action is politically motivated as I know similar action has been taken against other political sites. But if this is the case we are a very strange target as we have cross party support from all the Councillors and MP’s in the city. We would like an apology from Facebook, and we want them to reinstate our group without delay.”
A new Facebook page has now been created, and everyone who supports the campaign is urged to visit and “Like” it. It is called “Keep Sheffield Station open to the public.” Residents against Station closure also have a website at http://www.rasc-sheffield.com.

There is One Response to Facebook axe Station Campaign Group

The Facebook Group has now been restored. Facebook have apologised and assure us the deletion was an accident. Many thanks to Radio Sheffield for managing to get Facebook to react!