Ruby pleads for Justice to be released 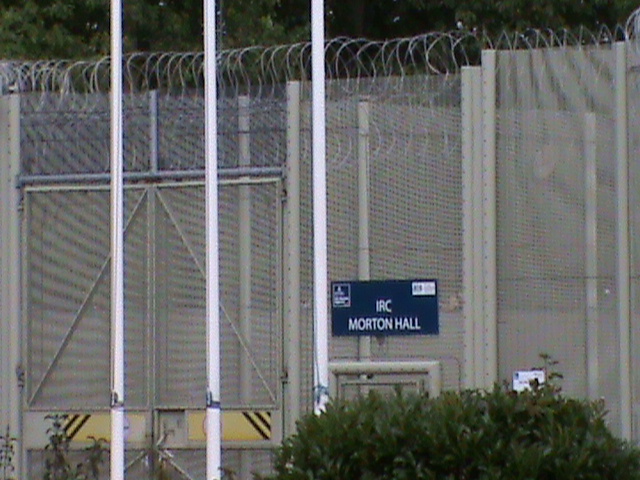 Since his deportation was cancelled last Friday Justice Charles has remained in Colnbrook Immigration Removal Centre, near Heathrow Airport. But last night he was moved back to Morton Hall IRC in Lincolnshire. His wife Ruby said “I am so relieved to hear that he is being moved out of Colnbrook.  Justice has not been getting his medication at the right times. The food was so bad there one night Justice choked and ever since he has been living on pot noodles. When I went to see him it took me the whole day to get there and back and I was only able to see him for 2 hours. I used all my benefits for the fare.”

Campaigner Rob Unwin said ” We are very relieved that Justice is being moved out of Colnbrook, especially in the light of the 2 recent deaths there. (see  press release from Medical Justice). It seems that little attention is given to the medical needs of the prisoners, and this is appalling, especially when Justice has not even committed a crime. We see no reason for the authorities to hold him any longer. He should be released so he can go back home to Sheffield and care for Ruby.”

Graham Wroe said “We are very concerned for Ruby. Justice is not only her husband but also her carer and now he has been taken away there is no one to take care of her. Ruby’s condition (lupus) means .that she struggles to cope on her own. The events of this week have shown how much this couple love each other. The Home Office can’t possibly argue that this is a sham marriage.”

BMJ    2011;  343:d5172   doi: 10.1136/bmj.d5172  (Published 11 August 2011)
Cite this as: BMJ 2011; 343:d5172
“Deaths at UK immigration detention centres prompt concerns about inadequate healthcare
Nayanah Siva, London
Three deaths of asylum seekers
in the care of UK immigration detention centres in the past month have
triggered police investigations and concern about the state of
healthcare provision for detainees.
Two men died from suspected “heart
attacks” at Colnbrook immigration centre near Heathrow airport, and
another man committed suicide at Campsfield House detention centre in
Oxfordshire last week.
Muhammad Shukat, a 47 year old Pakistani detainee, collapsed in his locked cell at 6 am on 2 July despite
repeated calls for help from his cell mate.
“It sounds like he [Shukat] had classic
symptoms of a heart attack and this poor 19 year old boy was banging on
the door trying to get attention, and the guards and nurses came several times and refused to call a doctor or call an ambulance until it was
too late,” said Emma Ginn from Medical Justice, an organisation that
aims to highlight inadequate healthcare provision to immigration
detainees in the UK.
Last week, in the same centre, a 35 year old man was found dead in his cell. His name has not been released, but a post mortem examination showed the cause of death to be a ruptured
aorta. The deaths are currently being investigated by the police and the Prisons and Probation Ombudsman.
The Guardian reported that John McDonnell, Labour MP for Hayes and Harlington, where
Colnbrook is located, said he feared there would be more deaths as the
centres and services struggle to cope with the volume of people being
detained.
Ms Ginn explained that Medical Justice
is one of several organisations that have issued repeated warnings about the conditions in these detention centres. She referred to a report by
the HM Chief Inspector of Prisons in 2006 on Yarl’s Wood immigration
removal centre, which had raised concerns about healthcare provision
there. “But nothing came of that [report],” she said. “We see near death experiences on a regular basis, and there isn’t a day that goes by
where people [in these centres] aren’t self harming in a very serious
way.”
“Based on medical evidence from many
hundreds of detainees, Medical Justice has documented gross failures in
healthcare provision, including denial of medication, denial of access
to hospital, and serious medical conditions going undiagnosed and
untreated,” said Ms Ginn.
Emma Plugge, director of Global Health,
University of Oxford, explained that most of the UK immigration removal
centres are run by private companies like Serco. “Certainly scrutiny of
the quality of care provided by these private contractors may not be
equivalent to that in the NHS,” she said, adding that these centres need to work more closely with the NHS for examples of good practice. There
is a paucity of research on the provision of healthcare in detention
centres, and more work needs to be done “to examine quality of care in
this vulnerable population,” she suggested.
“Greater clarity about the commissioning and delivery of healthcare in immigration removal centres is vital, as
is transparency about who is responsible for governance and monitoring
the standards of care,” said Gael Scott, policy officer for the Criminal Justice Programme at the Centre for Mental Health.
“We want to know how this has been
allowed to continue when we have issued so many warnings before,” said
Ms Ginn. Medical Justice is now calling for immigration removal centres
to be closed down.”

Glad to have you back in Sheffield Justice!