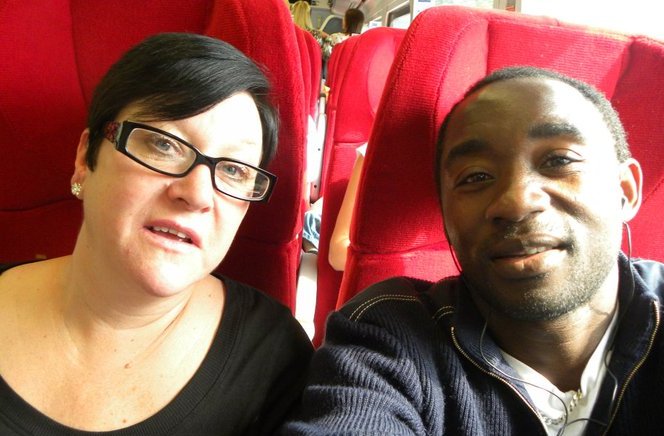 Bernard was not deported on Monday, but today (Wednesday 16th May) he was arrested and taken to Morton Hall Detention Centre.

Bernard Mboueyeu fled the Cameroon in 2007 when he was pursued by the authorities for supporting a political group opposed to the brutal ruling regime.

Bernard came to the UK in 2007 and married Sheffield woman, Sharon, a charity worker, in 2010. Sharon and Bernard have set up home in Wincobank and Bernard plays an active role in the local community, supporting local charities.

If Bernard returns to Cameroon he could detained, face torture, be locked up indefinitely and may never return to his wife Sharon in Sheffield.

Amnesty International’s 2011 Report noted that the Cameroon regime “continued to restrict the activities of political opponents and journalists and to stifle freedom of expression” and that “detention conditions remained harsh and often life-threatening”.

There are 3 Responses to Keep Bernard safe in Sheffield

i wish to add my full support to ben and sharonscampaign to ben safe and with hisfamily in sheffield.Theyare a family who only wish to be left iinpeace.ben and sharon recentllyreached their second wedding anniversary.at themoment ben is due to be deported .he has committed no crime.other couples make plans together.they are not worrying about someone they love been taken from them.only hope someone sees sense and takes into account the trauma in the lives closest to ben this actionwould create.apologies for mistakes not great on a computer.but would urge all fairminded people to follow ben and sharons campaign to keep bernard safe in sheffield.

Over 160 signatures already. Please keep sharing this on social networks so we can get it in the 1000’s by Monday.

I think it would be totally unjust and a denial of his basic human rights to deport this man. He is married and settled here and poses no threat to UK security or the public in general.
Please reverse this decision.