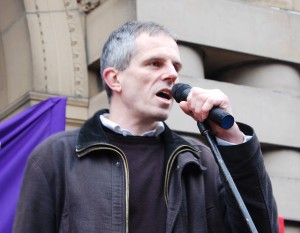 Sheffield Green Party has actively supported a range of campaigns over the last two years aimed at fighting the cuts, including Sheffield Save our NHS and saving Early Years services.

“The Labour Party has been notable by their absence from these battles. It has now set up a campaign called A Fair Deal For Sheffield, challenging the allocation of funds by the government which favours southern regions over northern ones.

The Green Party supports in principle any campaign to get Sheffield a fair deal. However, there have to be questions about the timing of this campaign, coming as it does, after the expected decisions have been made by Central Government.

I will not be attending the campaign launch as I have a meeting with officers about Sheffield’s 2013/14 budget, which I believe should be the priority for local politicians. In Sheffield, the Labour council still has choices and has proposed cutting outstanding children’s centres and a massive council tax rise for poorer households.

The Green Party will be campaigning for a fair deal in Sheffield and for Sheffield.”

Sad this is a cynical ploy, rather than a genuine attempt to start doing what a lot of us have been doing for months/years now, opposing in any way we can the destruction of the welfare state, ect ect. The Labour Party should have taken a lead, they are after all the official opposition but all they are interested in is getting re-elected, why I don’t know as they do not intend to do much different.
Several countries in Europe have just voted to introduce a transactions tax ana Robin Hood Tax (see very good website) The Labour Party have been “wanting cover” to fully support this, cover has now been given…will they dare ??

The level of cuts is frightening and I see the world I believe in being constantly worn down. 6,000 fewer nurses, fewer police, fire stations closing, libraries closing, sports facilities closing, cutbacks in council services across the board, student fees way too high.

The trouble is public bodies like councils really have very little choice other than to do things they’d rather not. I suspect no Labour councillor wants to close services down.

It is nationally where things have to change. There have to be budgets-it’s naive to think otherwise, but there are ways of raising money. One is the Financial Transactions Tax. We should keep the 50% Top Rate of Income Tax, cancel the Trident Missile replacement, do something serious about tax evasion and avoidance. Another cut that shouldn’t be happening is cutting back on Tax Officers!

Simon, Thanks for the comment and your suggestions. It is very, very tough for councils but a Labour council must explore every avenue to minimise the local cuts burden on the poorest and most vulnerable who have been hit hardest by coalition cuts. Look at the story on Council Tax benefit on the front page. If the council budget for 2013/14 has more measures like this that hit the poorest households then those people will fall way below the breadline.

Hi Simon, agree its all very frightening, it really is. There does seem to be more awareness of Tax evasion/avoidence now, thanks ironically to the high profile companies doing it, and yes we need more skilled Tax inspectors as well as new legislation to address. Believe the L/P when in power, sacked 100’s of Tax Inspectors. Bad move. Yes, nationally things do have to change, but the pressure for that “will not come from above” It’s UKuncut/SheffieldUNcut that have managed by direct actions to publicise tax evasion/avoidence for example. Green Party always supports such campaigns, Sheffield Save our NHS is another. Ive personally not actively been able to support for months, but today did a bit of handing out leaflets, asking people to sign petition to not cut minor injuries unit at Hallamshire. Even in the short time I was there, people surprised, not understanding the full assault on the NHS, so, V important to support such campaigns locally. Save our NHS is out somewhere every weekend, so anyone with an hour or so to spare…So whilst needing national change we have to try and drive/encourage it by campaigning local. Cheers Rachel.