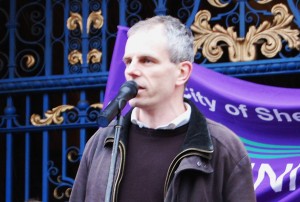 Green Councillors are calling on Sheffield City Council to use unspent cash to save Early Years services for Sheffield’s children.

“This could save many of the services that local people value and have campaigned for. We saw more than 10,000 people sign a petition to save early years services in the most deprived parts of the city and we think the Council could respond effectively by using unspent money that has already been budgeted for. This would save community nurseries run by charities and the voluntary sector from closing and reducing services.”

“The Council has been saying community nurseries could become sustainable within a year once new funding comes into place – let’s give them that chance to make the transition.”

1. Sheffield City Council has an anticipated £45m underspend at the end of the 2012-13 financial year

2. In the Children, Young People and Families portfolio, the underspend is £14m. Of this, £10m is due to delays and slippage. “Underspending on project estimates” and “other variations” account for the remaining £3.903m

3. The total cut to Early Years services in the Council’s 2013-14 budget is £3.578 million. This cut will mostly be from small voluntary sector organisations and charities, not the council’s own staff. The cut is to funding for community nurseries and children’s centres as well as the Pre-school Learning Alliance (PLA), Out of School Network (OSN), Sheffield Information Link (SIL), National Day Nursery Association (NDNA), Cultural Mentoring, Advice workers from local advice centres and CABx, Family Support and Parenting Support, Speech and Language therapy, Family Nurse Partnership and a Breast-feeding initiative

4. In the Early years review , the Council stated:

“The importance of a family and child’s experience throughout pregnancy and up to the age of five years referred to as the Early Years, is well documented as the most important period in a child’s growth and development and can make a significant difference to a child’s future life chances. The quality of health, care and education that young children experience during these years is critical to ensure that they have the best start in life. As well as being welcoming of children irrespective of need, parents tell us that the most important feature they look for in a setting is one that shows they really care about the children in their care and take seriously the responsibilities that parents place on them to care for their child.”