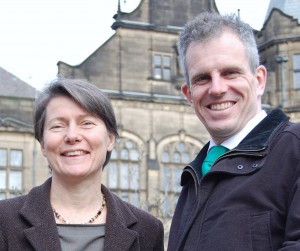 I share the Council Leader’s anger at the cuts imposed by central government on local authorities: the Green Party was the only Westminster party to put forward an economic alternative to austerity in their 2010 election manifesto. I recognise that, alongside vigorously campaigning for investment in a sustainable, fair society, we have to do our best for the city within our resources. I welcome the call for partners – business, the voluntary sector and individuals – to work alongside the council to keep services running.

What does not come over in Peter Kay’s leading article (“Council says only way forward is total rethink”, Sheffield Telegraph 12th Sept 2013) is the sea-change needed in the attitude of council departments and cabinet members to facilitate a new, more open and cooperative, relationship. Over libraries, for instance, far from “negotiating” with the 28 groups who expressed an interest in helping to keep them, officers had to wait months for the Labour group to decide how it wanted to respond to the “consultation”. The council refused to release information or engage in meaningful debate about the future shape of this crucial service. There has been no opportunity for public input into specific proposals now before us.

At a local level, as Green Councillors in Central ward, we have to battle to get the council to help communities help themselves: when the council proposed withdrawing services at Highfield Adventure Playground, we supported the Friends group to get accurate financial data and to establish a working relationship with Activity Sheffield and the community buildings team so they could start running services themselves. But it took a high profile campaign and the belated intervention of the Cabinet member to get beyond simply closing it. Now the Children’s Centre on Sharrow Lane faces a new threat: the nursery has closed – even though a local community enterprise is willing to take it over – and the council wants to move the well-loved and highly successful Sure Start team out, to make room for its own office-based staff. All this has been decided without any discussion with local staff or their Advisory Board, let alone Sharrow Community Forum or ward councillors. They are all treated as an irrelevant hindrance.

So, alongside calling for ideas and offers of help, the Labour administration needs to demonstrate a new willingness to work with those it purports to represent and serve.