Food OR shelter for children? 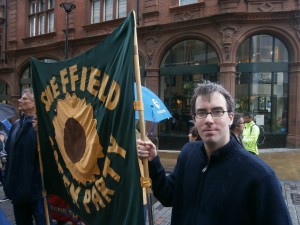 Brian Webster has written the following letter to the Star:

Nick Clegg has announced that the coalition are spending £600 million a year on a sensible measure to provide free school meals to infant school children from September 2014. Provided this initiative is properly funded to ensure that good, nutritious meals are always served it will benefit many families. The Childrens Food Trust, based in Sheffield, have hugely welcomed it.

I have to contrast this announcement with the £490 million that the bedroom tax will supposedly save in 2013/14. A National Housing Federation survey has found that more than half the people affected could not pay their rent between April and June. It is devastating people’s lives. Councils, housing associations and voluntary organisations cannot possibly offer the advice and support needed to hundreds of thousands of our most vulnerable people.

At the Lib Dem conference Nick Clegg made a hollow claim that they bring fairness to the coalition. The bedroom tax proves otherwise. And why did it take so long for Ed Miliband to pledge to reverse it? George Osborne initially announced plans in June 2010 and a high profile campaign led by Labour could have prevented this miserable 2013 for the poorest and most vulnerable.

There are 2 Responses to Food OR shelter for children?

Coalition pet projects mean massive cuts in the equivalent of 40 Sheffields next year.

Personally I don’t want my Tax Allowance increasing, and whilst free school meals is not a bad idea in itself is it worth closing libraries down to pay for it?

Your criticism of Labours position seems a bit bizarre. They’ve said they are against the bedroom tax as I am , so why not just welcome the position they’ve taken?

Thanks for the comment. There are lots of good things that you can do with £600 million including free school meals. What we are highlighting here is how easy it was for Nick Clegg to find this money while choosing to look the other way as people suffer under the totally unfair bedroom tax. And, as you point out, allowing the Coalition cuts to council funding that will force further council budget cuts in the next 4 years.

Our criticism of Labour is simply that they have too often joined the Coalition parties in “strivers or skivers” rhetoric over the past couple of years instead of standing up for some of the most vulnerable people at a time when close to 3 million are unemployed and benefits are being slashed across the board. Having a policy is one thing but acting on it is another and Labour have barely been seen on the streets fighting the bedroom tax in the last year. It could have been a much bigger, stronger and visible campaign if they had.