Greens aiming to double Councillors in May Elections 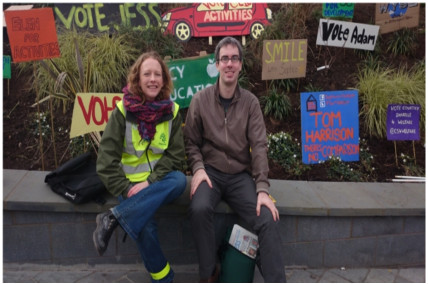 Sheffield Green Party is aiming to take seats in Broomhill and Central wards in the May council elections and has announced its candidates.

In Broomhill ward, the Green Party finished just 201 votes behind Labour in 2012 and are strong contenders to take the seat from the Lib Dems who finished a distant third then. The candidate is Brian Webster, a PhD student who studies and works in the ward.

Brian says: “Residents feel let down by Labour councillors who voted through plans that will force Broomhill and Upperthorpe libraries to be run by volunteers. We have offered consistent practical help and advice to local library campaign groups, as well as putting forward citywide alternatives to library cuts. Greens have worked hard here over many years and I offer a clear alternative to Labour.”

In Central ward, the Green Party has current councillors Jillian Creasy and Rob Murphy. They are looking to take the 3rd seat after winning the last election in 2012 by 429 votes. The Greens’ candidate, Sarah Jane Smalley, lives in Sharrow and runs her own office services business.

Sarah Jane says “I know a lot of people who live and work in Sharrow, Broomhall, Kelham Island and the City Centre. I’m passionate about listening to people and making sure that they’re properly represented. We’ve been campaigning against the cuts and I’m really excited about the prospect of joining the Green team in the Town Hall to continue working hard all year round for our communities.”

Sheffield Green Party Chair Jon Ashe comments: “Greens have made a big difference during our 10 years in the council chamber. We are one of just 3 council groups – there are no Tory councillors. We have a real chance to double our councillors from 2 to 4 in this election. Green councillors have built a reputation for year-round hard work and offer clear alternatives to Labour and the Lib Dems.”

Notes :The results from the last elections in 2012 follow and are at https://www.sheffield.gov.uk/your-city-council/elections/election-results/2012.html 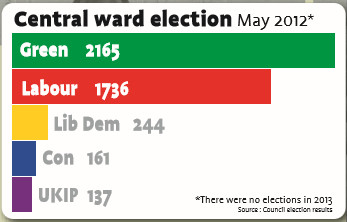