What to do at the ballot box!

The local elections are run using the “first past the post” system. You choose the person that you think will best represent your ward in the Town Hall. To find out about your Green Party candidate see our interactive map here. If you want to vote Green Party look for name Green Party and earth/sunflower symbol on the ballot paper and draw a cross  X next to it.

It is important that you don’t put any other marks on the ballot paper or your vote may not be counted. If you make a mistake you can ask for another ballot paper. The person that gets the most votes is elected. Everyone in Sheffield can vote for a Green Party candidate. In Walkley there are two vacancies so you will have two votes.

The European Elections are on the same day. Instead of voting for a person you vote for the Party that you think will best represent you in Europe. Each party has chosen a slate of candidates and ordered them. Six candidates will be elected to represent Yorkshire and Humberside. You place one cross next to your favorite party. Look for “Green Party” and the world/sunflower logo. 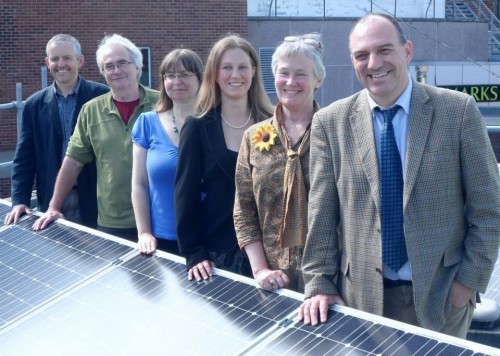 Yorkshire and Humberside Green Party candidates for the Euro Elections.

The count works like this. The votes are counted for each party. The top candidate from the party with the most votes is elected. That parties vote is then halved and the votes are compared again. If the same party still has the most votes their second candidate is elected and their vote is then divided by 3. If a different party now has the most votes their first candidate is elected and their vote is divided by 2. This process continues until 6 people are elected. In Yorkshire and Humberside the candidate at the top of the Green Party list is Andrew Cooper (on the right hand side of the picture). He has a good chance of being elected because of the proportional system.

These are the results from last time.

The Green Party were just 1.3% or 15,683 votes behind the BNP. If some of the supporters of small parties had voted Green we would have a Green MEP today and would have beaten the fascist BNP, preventing them from being elected. Please use your vote wisely. Vote Green Party.

There are 2 Responses to What to do at the ballot box!