Greens welcome report calling for a halt to fracking.

The Green Party today welcomed Parliament’s Environmental Audit Committee report calling for a moratorium on Fracking in the UK. The Report said Fracking is incompatible with UK policy to reduce carbon emissions to address climate change. The report also raised significant concerns about the potential impact on the local environment such as the pollution of groundwater. The Greens have been the leading political party supporting grassroots movements opposing fracking in communities. 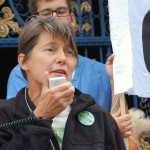 “Green Councillors were ahead of the curve, in September 2013, when we successfully proposed a motion pushing the council to develop a no-fracking policy within Sheffield City Council boundaries. What we need now is a clear response from all Westminster parties to the report. Currently only the Green Party among UK wide political parties opposes fracking”

There are a number of sites seeking planning permission in and around Rotherham and Doncaster. If those sites are approved fracking companies could start to look at the rural areas on the edges of Sheffield.