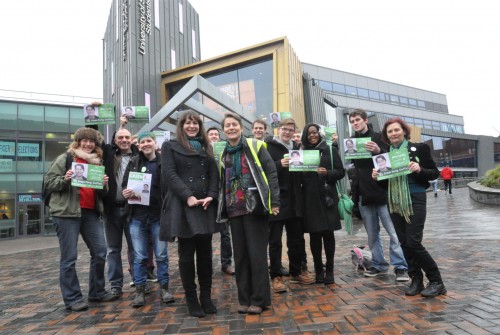 The Sheffield Green Party and Sheffield Young Greens were left in a buoyant mood after the visit of deputy leader Amelia Womack and a series of coordinated events for National Voter Registration Day (Thursday February 5th).
As well as holding an informational stall at the University of Sheffield Students’ Union, the Sheffield Green Party and Young Greens coordinated actions in Broomhill, where council candidate Aodan Marken led a team knocking on doors, and Sheffield Hallam University campus, all with aim of increasing the number of Sheffield students registered to vote in the May elections.
The day ended with an inspirational talk by Green Party deputy leader Amelia Womack, who encouraged listening students to register, campaign, and make the difference in May.
Jillian Creasy, parliamentary candidate for the Greens in Sheffield Central constituency stated “The day was a great success, we were able to talk to hundreds of students about getting registered to vote, and were really encouraged by how many of them said that they would be voting Green in both the general and local elections!
“There was a real buzz and sense of excitement around as we spoke to students about the elections. It’s not surprising that so many students and young people are telling us that they are intending to vote Green, policies such as scrapping tuition fees and creating 500,000 social houses specifically for renting are aimed at improving the lives and prospects of all young people in the country.”
Sheffield Young Greens Chair Adoan Marken, who is also standing as the Green Party’s council candidate for Broomhill Ward, added “Having the deputy leader visit Sheffield on voter registration today was fantastic. She really rallied and inspired us all as we went out in the rain to speak to students from across the city about making sure they were ready and registered to vote in the upcoming general elections.”
Notes:
Amelia Womack event press release: http://archive.sheffieldgreenparty.org.uk/2015/01/29/hear-amelia-womack-speak-about-the-green-surge/
500,000 new social rent houses policy press briefing: http://greenparty.org.uk/files/Housing-Policy-Briefing.pdf