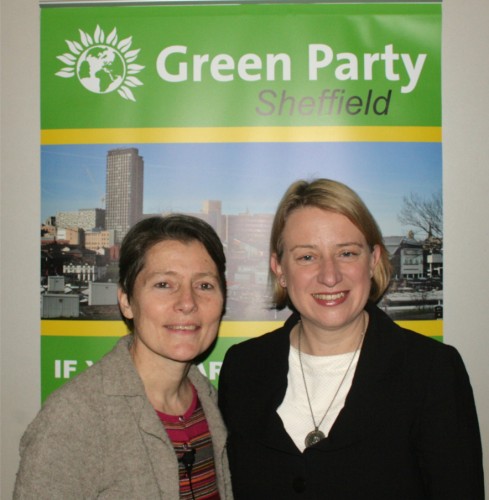 Natalie Bennett, leader of the Green Party in England and Wales, stated “Sheffield Central is one of our key target seats, and the reception that I had from everyone I met today and the success of each of the events organised by the fantastic local party really highlights why that is – there is a real Green Surge happening in this city. We are very hopeful that come May, the city of Sheffield will have led the way and returned a Green MP to Westminster.”

Jillian Creasy added “The whole day was a great success, from spending time spreading the Green message of hope and fairness right across the city alongside our party leader, to celebrating passing 1,000 members of the Sheffield and Rotherham Green Party at the evening speech.

“It is simply brilliant to know that there are now 1,000 Green Party members in our local party. This kind of support gives my campaign a massive boost both in terms of providing extra boots on the ground and a lift to everyone involved in knowing that so many people support our cause.

“Today is yet more evidence of just how strong the Green Party really are in Sheffield, and justifies our ambitions and excitement about the possibility of electing the first Green MP of the North in May here in Sheffield Central constituency.”

Notes: passing 1,000 members indicates a rise of more than 300% in membership figures since the end of January last year, when figures were just under 300 individual members.