“Vote for what you believe in” says Jillian Creasy 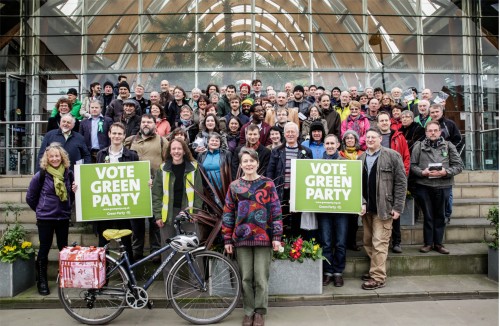 In the final week of campaigning my thoughts turn to those I have met over the past few months as a Green candidate – and past 11 years as Green councillor – in the lively, diverse, Sheffield Central constituency.

My time as a Central Ward Councillor has been spent building relationships and campaigning for better homes, streets and green spaces. I have done my best to represent communities and local businesses and to hold a complacent Labour administration to account.

Green councillors have now become household names and many people have heard about Green MP Caroline Lucas. This year we are seeing an unprecedented surge of support across the five wards of Sheffield Central and are set for a vote share we could only dream of in 2010.

This is partly down to the collapse of Lib Dem support since their collaboration with damaging Tory austerity. But it’s mostly because of hard work and dedication and the trust and support we have built up through our work in the Council.

Something I hear a lot, whether from students in city centre flats, Somali families in Broomhall, single parents in Sharrow, or small business owners in Kelham Island is that ‘Green Councillors help the people’. It is a simple but important ethos.

All 4 non-Labour Councillors in Sheffield Central constituency are from the Green Party and we are confident of adding more.

This all means that we are better placed than ever to challenge Labour dominance in the centre of Sheffield and I am striving to be elected here as the Green Party’s first MP in the North. And we really can do it! It is very exciting that a vote for what you believe in can result in those ideas and values being raised and debated in Parliament.

People have become disillusioned with politicians; too many have a vested interest in inequality. Caroline Lucas has shown that just one Green MP can be a huge force for change in the dusty old corridors of Westminster.

If elected I would work with her and other Green MPs to push big, bold, brave policies to the forefront of mainstream politics, to drive change from within by challenging complacency and persuading the Government of the day that an alternative is possible. All I ask for is for you to put your faith in me on May 7th. I won’t let you down.