The Sheffield Star reported that the Green Party had made a budget amendment to install solar panels on council houses. In fact our budget amendment was much more comprehensive than this, so we reprint it here in full.It is indeed a budget proposal for a council that listens, but unfortunately it was voted down by the Labour Councillors. 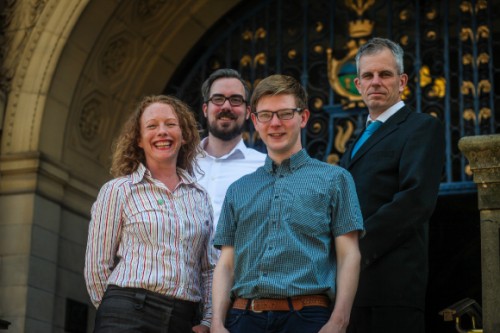 That the recommendations of the Cabinet held on 17th February, 2016, as relates to the City Council’s Revenue Budget and Capital Programme 2016/17, be replaced by the following resolution:-

(1) deplores the cuts to local authority funding being imposed by central government and applauds the efforts of politicians and campaigners calling for an alternative to austerity;

(2) thanks the officers of the Council and in other organisations directly affected by the austerity programme in the way they have responded to the cuts and made sacrifices;

(3) notes that, this year, over £9 million of additional cuts are needed because of pressures and additional spending, which we believe arises from the lack of flexibility in long-term outsourced contracts with just two private companies, specifically the Waste Management and Streets Ahead contracts;

(4) further notes the intention of Government to reduce the main source of local authority funding, the Revenue Support Grant, to nil and to switch funding to business rates in their own areas, a move which will favour more affluent areas of the country;

(5) therefore recognises that austerity is not going to go away and that Elected Members in Sheffield, however difficult the crisis we face, have a responsibility to do the best they can for the people of Sheffield, prioritising the available resources to protect communities and the most vulnerable and working towards a more equitable and resilient city;

(6) believes that the people of this city want a Council that listens to them and takes their genuinely-expressed concerns into account;

(7) therefore, will open up Council meetings to public scrutiny by online web broadcasting;

(8) will cut political spin emanating from the Town Hall by cutting the posts of Group Policy Officers and requiring politicians to do their own research and press work;

(9) will install a maximum 10:1 pay ratio between the highest and lowest paid Council officers, closing the gap by reducing the pay of those on the highest salaries over £50,000 a year;

(10) will further reduce up to 2 posts in the HR Service to protect frontline services;

(11) will reduce cuts to services for the older and disabled people and help ensure decent pay and conditions for care staff, putting an extra £253k into adult social care;

(12) regrets not having taken up the option of a significant investment in jobs in the renewable energy industry when proposed in 2014, to reduce fuel bills and create an income stream for other services, and also regrets abandoning the subsequent scheme adopted in 2015 once the Government reduced support for renewable energy in favour of dirty sources such as nuclear, diesel and fracking;

(13) believes, however, this Council can use the economies of scale available to it and will invest in a further scheme of solar panel installation on the Council’s housing stock by re-prioritising capital funding within the Housing Revenue Account;

(14) will create or maintain further jobs by setting aside unallocated New Homes Bonus funding to identify and survey brownfield sites for re-use for new housing and business, so as to minimise the impact of new building on the green belt or those brownfield sites that provide particular benefits to wildlife or the local community;

(15) will also create jobs by setting aside further unallocated New Homes Bonus funding to invest in a fund for energy efficiency schemes in maintained schools;

(16) will put further resources into turning empty properties into much needed homes by investing a small amount of New Homes Bonus funding in further enforcement work in this area, which will in turn generate increased NHB funding as homes are brought back into occupation;

(17) will also reverse the proposed cut in private sector housing, in order to ensure higher standards in this sector;

(ii) develop proposals to offer more policing and services related to the night-time economy by ensuring high-value businesses make an appropriate contribution to social costs through use of a night-time levy scheme;

(iv) increase the hardship fund to £1m to alleviate the impact of increased Council Tax bills, in particular on the 30,000 lowest income households affected by the loss of Council Tax Benefit and that have seen by far the biggest increase in Council Tax in recent years; and

(v) will invest £20k of the Local Growth Fund (New Homes Bonus) to install solar panels on the Park Centre as part of its roof renovations, thereby reducing fuel bills and increasing the sustainability of the building;

(19) will reduce the price of permits in parking permit zones to 2010 levels by shifting the cost of parking in these residential PPZ to non-residents, meaning that people living in some of the most congested and polluted areas of the city are not subsidising other transport services;

(20) further, will prioritise the installation of 20mph zones in areas with the worst road safety accident statistics and, therefore, will re-prioritise funding available in the Local Transport Plan programme to a default 20mph speed limit in the city centre;

(21) recognises the importance of children learning to use public transport safely and therefore will provide funds to mitigate the impact of the 10p rise in children’s bus fares;

(22) will forego any increase in Members’ allowances;

Use of 2015/16 projected revenue underspend

(24) notes those specific projects included in the years 2016/17 to 2021/22 Capital Programmes at Appendix 9 of the report on the Capital Programme, subject to the amendments outlined in paragraph (23) above, and that block allocations are included within the Programme for noting at this stage and detailed proposals will be brought back for separate Member approval as part of the monthly monitoring procedures;

(26) approves the Corporate Resource Pool (CRP) policy outlined in Appendix 4 of the report on the Capital Programme such that the commitment from the CRP is limited to one year and no CRP supported schemes are approved beyond 2016- 17 unless explicitly stated, and that further reports will be brought to Members as part of the monthly approval process should the receipts position improve;

(27) after noting the joint report of the Chief Executive and the Interim Executive Director, Resources now submitted on the Revenue Budget 2016/17, approves and adopts a net Revenue Budget for 2016/17 amounting to £406.492m, as set out in Appendix 3 of that report, and subsequently amended in the light of paragraph (23) above, as follows:-

* The total Capita savings for 2016/17 are £3.4m but are reflected as a budget reduction within the Resources portfolio instead of a Corporate Saving.

(31) approves the Treasury Management and Annual Investment Strategies set out in Appendix 7 of the Revenue Budget report and the recommendations contained therein;

(32) approves the Minimum Revenue Provision (MRP) Statement set out in Appendix 7 of the Revenue Budget report;

(38) approves the proposed amount of compensation to Parish Councils for the loss of council tax income in 2016/17 at the levels shown in the table below Page 32 paragraph 168 of the Revenue Budget report;

(39) notes the precepts issued by local parish councils which add £503,423 to the calculation of the budget requirement in accordance with Sections 31 to 36 of the Local Government Finance Act 1992;

(40) notes the information on the precepts issued by the South Yorkshire Police and Crime Commissioner and the South Yorkshire Fire and Rescue Authority, together with the impact of these on the overall amount of Council Tax to be charged in the City Council’s area;

(41) notes that, based on the estimated expenditure level of £406.492m set out in paragraph (27) above, the amounts shown in Appendix 6b below would be calculated by the City Council for the year 2016/17, in accordance with Sections 30 to 36 of the Local Government Finance Act 1992;

The Council is recommended to resolve as follows:

(b) for dwellings in those parts of its area to which a Parish precept relates as in the attached Appendix 6c.

(a) £1,369,647,044 being the aggregate of the amounts which the Council estimates for the items set out in Section 31A(2) of the Act taking into account all precepts issued to it by Parish Councils.

(f) £1,360.4751 being the amount at 3(d) above less the result given by dividing the amount at 3(e) above by Item T (1(a) above), calculated by the Council, in accordance with Section 34(2) of the Act, as the basic amount of its Council Tax for the year for dwellings in those parts of its area to which no Parish precept relates.

4. To note that the Police and Crime Commissioner and the Fire and Rescue Authority have issued precepts to the Council in accordance with Section 40 of the Local Government Finance Act 1992 for each category of dwellings in the Council’s area as indicated in the table below.

5. £3,460,485 The amount set by the authority at 2 above, under Section 30 of the Act, includes an amount attributable to the adult social care precept.

6. That the Council, in accordance with Sections 30 to 36 of the Local Government Finance Act 1992, hereby sets the aggregate amounts shown in the tables below as the amounts of Council Tax for 2016/17 for each part of its area and for each of the categories of dwellings.

7. The Council’s basic amount of Council Tax is not excessive in accordance with the principles approved under Section 52ZB of the Local Government Finance Act 1992, therefore no referendum is required.

There is One Response to Green Party budget amendment in full

A well thought out and fairer budget than Labours. The £91,000 for policy advisors, £130,000 council is going to be spending on two new assistant directors being recruited at present (adverts are on council website) along with scrapping contributions towards the failed seven stone project and/or projected underspend should be reinvested in restaffing libraries. The savings to restaff community libraries are there. Not doing so is more a political decision from Labour in order to fund their half baked regeneration schemes. In short council should look to save on Policy Advisors, freezing recruitment of senior management and look for alternatives to their wholesale demolition approach to city centre regeneration. Library staff are more important than any of these.