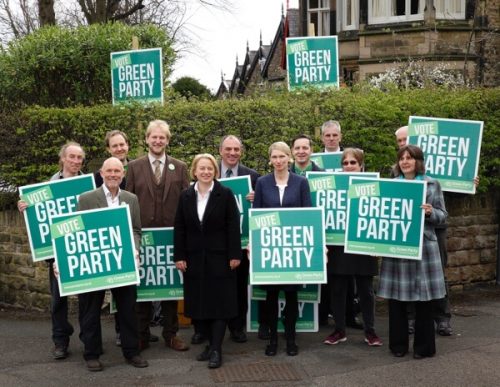 The photo shows Natalie Bennett with Sheffield Green Party candidates at a location on the border between the Nether Edge & Sharrow and Broomhill & Sharrow Vale wards – both wards that Greens expect to win seats in.

Greens, Labour and the Lib Dems are the only parties standing in all 84 seats in Sheffield.

Cllr Jillian Creasy became the first Green councillor in Sheffield in 2004, in the last all-out election.  There has been a Green council group since 2006 and the group has held the balance of power on 3 separate occasions.

“We can change Sheffield for the better in May.  Sheffielders have the chance to vote for a Council that will listen, value their views and work with them not against them.”

The recent bus consultation and changes highlight a Labour council that is not listening to Sheffield people.  Green councillors continue to offer constructive alternatives to the council and work hard on the ground for the people they represent.  Greens will ask voters to support our local manifesto which emphasises our approach of working closely with local people.”