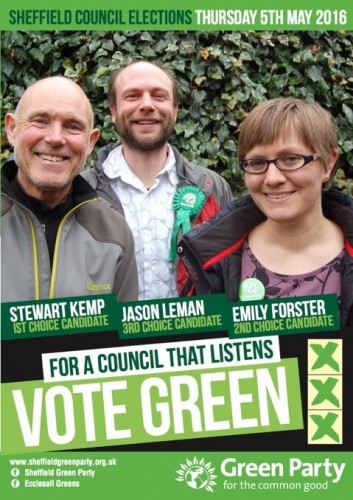 Your three votes can elect three Green councillors in the new Ecclesall Ward.

Your Green Party candidates are working hard for a greener, fairer city and for greater accountability of Sheffield Council to the community. They’re pushing for an integrated transport system and provision of green spaces to combat health-damaging air pollution.

Stewart Kemp is our 1st choice candidate to be your local councillor. He is a retired senior local government officer, volunteers with Sheffield Youth Justice Service and Sheffield’s school literacy scheme, and is working with residents concerned about air pollution and road safety.

Emily Forster is a researcher and environmentalist; and Jason Leman is a researcher, parent and social justice activist. Stewart, Emily and Jason all live in Ecclesall and have been campaigning on local issues including the schools consultation, felling of healthy street trees, and the closure of Bents Green surgery.