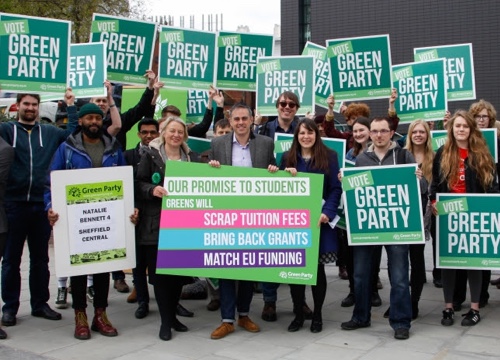 Natalie Bennett with Jonathan Bartley and Amelia Womack at the launch

The Green Party pledged to:

Jonathan Bartley, said
“The Green Party is the only party standing up for students and putting young people at the heart of its campaign. Education is a right not a commodity to be bought and sold, and we need a level playing field so everyone has the chance to go to university or college.

“Students need a liferaft in the Brexit storm. They are being ignored in the Brexit negotiations, despite having the most to lose. Funding for our universities is under unprecedented threat. The Green Party will not let young people miss out on opportunities to study, travel and work across Europe because of a decision that they so emphatically voted against.

“Building a better future for young people is an absolute priority and today we are committing to policies that will help us work towards an open, fairer society where everyone has the chance to succeed.”