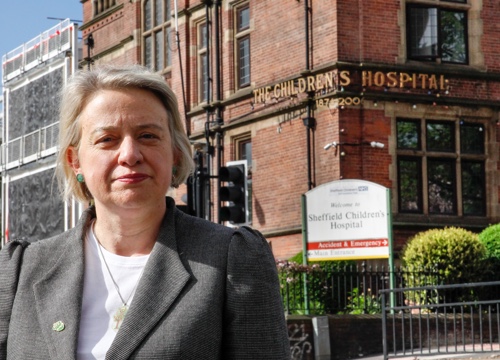 Today, the National Health Action Party – founded by NHS staff and activists to campaign for an end to the privatisation and under-funding of the NHS – has endorsed Natalie Bennett’s candidacy in the Sheffield Central constituency.

The National Health Action party have backed Natalie to become the first Green MP in the North in light of her tireless efforts in campaigning for a publicly owned and properly funded NHS.

With a straight fight between Natalie and Labour for the Sheffield Central Constituency, the National Health Action Party’s endorsement adds to momentum being built in Sheffield by the Green Party.

Reacting to the endorsement, Natalie said:

“I am absolutely delighted to have the endorsement of the National Health Action Party. The Green Party has a longstanding record of supporting the NHS and putting its funding and public ownership at the top of our political agenda.

“In Sheffield Central, voters have the chance to make history and elect the first Green MP in the North, an MP with strong and consistent values and principles who will always defend the NHS.

“I have marched with student nurses for bursaries, and joined junior doctors on the picket line as they fight for their pay and conditions. I know how angry these dedicated professionals are.

“The privatisation introduced by Conservative and Labour governments must be rooted out of our National Health Service. The Green Party is the party you can trust in caring for our health service and listening to the dedicated workers who we all rely on, and my endorsement from the National Health Action Party reflects this.”

Greens have an excellent record opposing outsourcing at council level, good to see they are doing the same opposing NHS privatisation. They may wish to ask Labour council why it has seen fit to raid the Health budget to prop up its failing volunteer libraries by around £200k per per year after the original 2014 plan to have them become self funding by now failed miserably