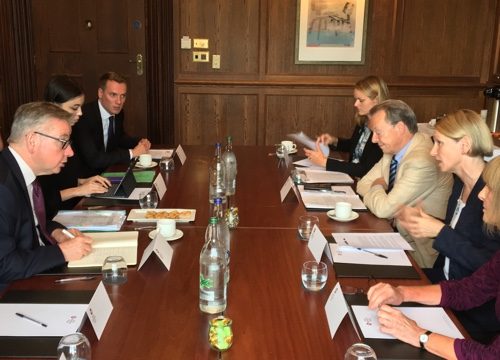 Yesterday, the Secretary of State for the Environment, the Rt Honourable Michael Gove, visited Sheffield and met with Cllr Alison Teal of the Sheffield Green Party. The meeting also included representatives from the Sheffield and Rotherham Wildlife Trust and Sheffield Trees Action Groups, and was facilitated by the Editor of the Yorkshire Post.

The Secretary of State attended the meeting to learn more about the campaign groups and their supporters, and their aims and demands.

“Today I had the opportunity to discuss the Council’s tree felling programme and the campaign against it with the Secretary of State, who had traveled to Sheffield to discuss the situation with myself and other tree campaigners and organisations.

“The Secretary was very shocked to hear about how the campaign has been completely ignored, derided, and defamed by the Labour administration, despite us only ever wanting to sit down and have constructive dialogue.

“This Labour Council’s treatment of the many thousands of people, especially in my ward of Nether Edge and Sharrow, who disagree with the destruction of trees, is quite frankly appalling. The Secretary of State and everyone around the table agreed that the Council has handled this issue incredibly badly.

“Mr Gove said his impression was that, ‘Sheffield is losing, we are losing, an amazingly valuable resources and the justification for it seems as flimsy as an autumn leaf’.

“We want a constructive way forward and the Secretary of State was clear that he would be looking at any legal and policy options available to his Department to help us save healthy street trees.”

“It has come to something when the Environment Secretary himself feels the need to travel to Sheffield to listen to residents, campaigners, and opposition Councillors before then having words with the Leader of the Council.

“Unfortunately, this just demonstrates how the unpopular and unwanted tree felling programme continues to be a source of national and international embarrassment for  the city of Sheffield.”

Everything crossed for a good outcome for the trees. The arrogant, complacency of the current councillors is astounding.

It comes to something when Michael Gove (Michael Gove!) is a voice of reason in a debate like this. I never thought I should find myself on the same side of an argument as him, but here we are…strange days indeed.