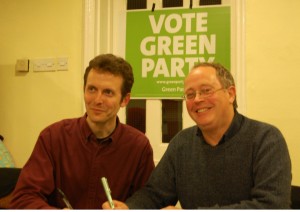 Sheffield Green Party have made a Clean Campaign Pledge for the forthcoming campaign and are inviting other parties in Sheffield to make the pledge as well.

Cllr Jillian Creasy, who is standing in the general election in Central
Constituency ,said :

“I hope the other parties in Sheffield will sign up to our Clean Campaign Pledge ahead of the General Election and local elections on May 6th. Public regard for politicians has never been lower, and we need to regain public trust in politics and politicians. This pledge follows on from the Green Party pledge in the Norwich North bye election last year which was approved by veteran anti-sleaze campaigner and former Independent MP, Martin Bell.”

“Voters across the UK are tired of negative campaigning, of insults and
twisting the facts. Greens in the city will continue to focus on our policies on the issues that matter to local people, including jobs, public services, housing and education. We very much hope the other parties will contact me to sign up in the next week. ”

Rob Unwin, who is standing in the local elections in Central Ward, added :

“The Green Party has a long tradition of playing fair in its election campaigning. I hope all parties will agree to campaign on the issues people want to hear about. If elected, I intend to serve the people of Sheffield as an honest and independent voice, who will represent and fight for the issues that local residents care about. This is reflected in the Clean Campaign Pledge which I urge other parties to sign. ”

–          To fight a clean, positive and honest campaign around the issues that
concern local voters.
– To tell the truth about what we stand for and have achieved, and about
what others stand for and have achieved.
– To refrain from personal attacks.
– To make only honest and reasonable promises.
– To take money only from organisations and individuals whose motives in giving us money we do not have reason to suspect.
– To sign up to and fully comply with the Sheffield City Council Electoral Code of Conduct

If elected, we pledge:

– To publish online details of all personal expenses incurred as a Member of Parliament.

– To publish online details of all office expenses incurred as a Member of Parliament.

– To publish online details of all donations of more than £1,000, in line with Electoral Commission rules.

– To appoint independent inspectors to approve expenses accounts at the end of every financial year.

– To open up the unedited expenses claims to local newspapers at the end of every financial year.

– To meet all tax liabilities such as stamp duty without claiming them from the taxpayer.

There is One Response to Greens make clean campaign pledge