Five good reasons to vote Green on May 6th ! 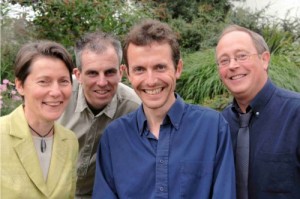 The first Green MP’s are expected to be elected at this election. Green leader Caroline Lucas is the front runner in Brighton Pavilion.
We got 18.2% in the European elections and averaged 20% in the 2008 council elections across Central constituency. Vote Jillian Creasy (left of picture) for a Sheffield Green MP.
All 3 councillors in Central council ward are Green. Vote for Rob Unwin (third from left in picture) to maintain the Green team of 3.
Greens are the clear challengers to the Lib Dems in Broomhill council ward. Vote for Bernard Little (right of picture) to win in Broomhill.
The Green group is one of only 3 on Sheffield City Council alongside Labour and the Lib Dems. There are no Conservative councillors or MP’s in Sheffield.

Two votes green on May 6th !