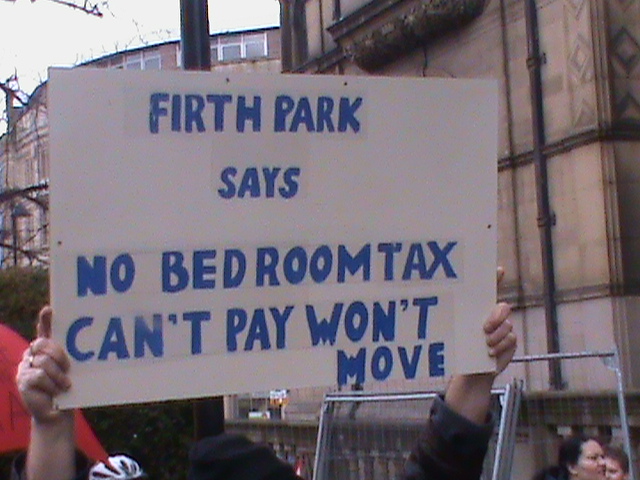 Sheffield Green Party will ask Sheffield City Council to do more to support those affected by the “Bedroom Tax” in a motion tabled at the Council meeting on Wednesday 3rd April. The party is also asking the Council to strengthen its lobbying of Government for the tax to be abolished.

Sheffield Council has been given Government funding to help some people in
difficulty, but only have money to cover part of the loss except in the
most extreme circumstances. The Labour administration has proposed lobbying Government and local MPs to end the tax.

Councillor Jillian Creasy comments : “More and more people are contacting
councillors with problems related to the new Bedroom Tax. They are
struggling on low pay or unable to work and facing all sorts of other cuts
too. Some face losing 25% of their housing support. They cannot afford to
stay in their home, but neither is there anywhere suitable to move to. The
Green Party wants the government to drop the Bedroom Tax completely.
Failing that, we have to help these households the best we can”

Cllr Creasy continues:  “We’d like the council to lobby
government by collecting detailed case studies of people affected in
Sheffield and using those as evidence. The council could also look into
whether it can reclassify homes so they don’t get hit by the tax and asking
Sheffield Homes not to evict where rent arrears are due to the cuts in
housing benefit. Tenants can ask for support from the Council but we need
to make sure they are claiming any other benefits they qualify for.” 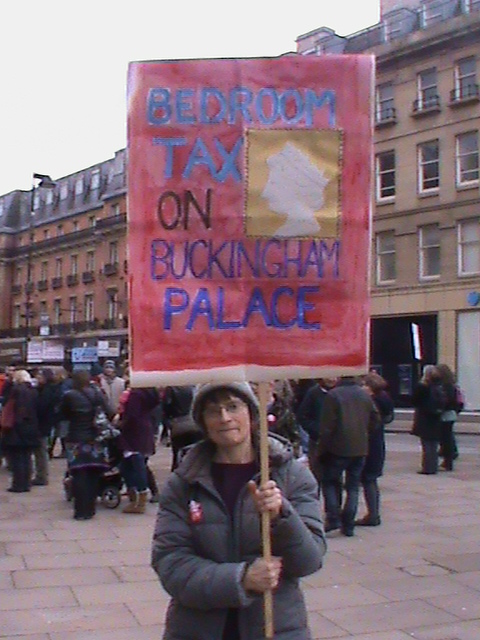 1.      Sheffield City Council was given £1m by Government for
Discretionary Housing Payments for the 2013-14 financial year to cover a
range of changes to housing benefit and social housing rents.

2.      Around 7,500 to 10,000 households in Sheffield will be affected by
the “Social Sector Size Criteria” or “Bedroom Tax”, with potential
additional payments exceeding £10 million.

3.      Current information leaflets on changes to Housing Benefit
distributed by Sheffield Council do not state that tenants can claim
Discretionary Housing Payments if they are facing hardship.

(a)       believes that the Government’s “Bedroom Tax” is unjust and
misguided and congratulates those who organised and attended simultaneous
demonstrations across the country on Saturday 16th March 2013;

(b)       regrets that the Government is persisting with the policy,
causing distress to thousands of families struggling to cope with cuts to
social support and a difficult economic environment;

(c)        is pleased that the Government has dropped its appeal against
the court ruling granting some relief to very disabled children being
forced to share a bedroom;

(d)       supports the Government’s decision to change rules so that foster
children, students and those in the armed forces, are now no longer
considered to be under-occupying, although notes these ill-planned
reversals are causing further confusion and cost;

(e)       calls on Government to fully fund cases where people are no
longer considered to be under occupying due to policy changes, rather than
top-slicing Discretionary Housing Payment (DHP) funds;

(f)         notes that many so-called “spare bedrooms” in fact house
medical equipment, or are used as a bedroom by spouses unable, due to
illness, to sleep in the same room, or as a carer’s room where a household
member requires overnight care;

(g)       further notes that many separated parents with visiting rights
need a spare room for the visits of their child(ren);

(h)        notes that Government funding for DHPs will fund around 1 in 16
households where under-occupancy applies, falling far short of supporting
those in need;

(i)         notes that councillors are receiving a steady flow of casework
around the legislation;

(j)         will therefore gather detailed case studies of those affected
and submit these as evidence to Government on the effects of the
under-occupancy measures and a case for more Government support for DHPs;

(k)        believes that costs arising from making decisions on
discretionary payments will be substantial;

(l)         therefore, requests the Administration to do everything it can
to inform and help residents affected by the bedroom tax and avoid
eviction, for example through:

(i)         encouraging tenants to claim the benefits they are entitled to,
for example Disability Living Allowance; and

(ii)        giving maximum practical support and choice to those tenants
who do wish to move;

(m)      also requests the Administration to look into:

(i)         whether it would be possible to reclassify bedrooms so as to
avoid the tax; and

(ii)        whether it would be feasible to ask Housing Associations and
Sheffield Homes not to take eviction proceedings where arrears are solely
due to unaffordability caused by the bedroom tax;

(n)        calls on the Government to abandon the Tax, and to address the
housing shortage through bringing up to habitable, energy-efficient
standard the approximately one million empty homes in the UK, and through
an energy-efficient-house building programme, thereby providing three
advantages, namely addressing the housing shortage, boosting the economy
through increased employment, and providing the carbon reductions to which
the Government is committed; and

(o)       directs that a copy of this motion is sent to the Prime Minister
and the Secretary of State for Work and Pensions.

Some factual info on the bedroom tax from the BBC is here: