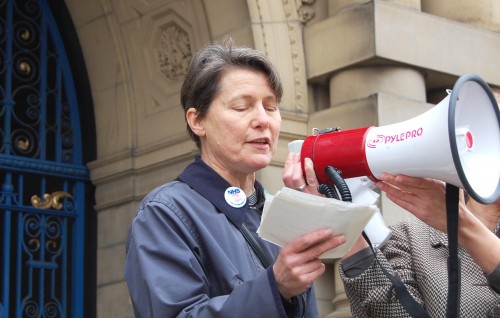 Cllr Jillian Creasy speaking in support of the NHS at the Town Hall.

Green Party councillors are calling on Sheffield City Council to support the “999 Call for the NHS” campaign in a motion to be tabled on September 3rd.

On the August Bank Holiday, Green party members joined the Sheffield leg of the People’s March for the NHS which is following the 300 mile route of the historic “Jarrow Crusade” against poverty and inequality in 1936.

Councillor Jillian Creasy, formerly an NHS GP, spoke at the send-off for the march at the Town Hall. She comments:

“We congratulate the Sheffield Save Our NHS group for organising the welcome and hosting the marchers, who want the NHS to be publicly owned and delivered. Secretive trade deals such as the Transatlantic Trade and Investment Partnership (TTIP) threaten the NHS because they would allow global corporations to sue Governments if their commercial interests were threatened. We therefore call on the council to support the NHS by condemning TTIP.”

The Green Party motion to the Council is below

Notice of Motion Given by Councillor Jillian Creasy

a. Supports the aims of the 999 Call for the NHS campaign, namely to have a health service which is universally accessible, free at the point of delivery and distributed according to clinical need not ability to pay;

b. Congratulates Sheffield Save Our NHS for coordinating the welcome, support and publicity for the Peoples March for the NHS as it passed through Sheffield on 25th and 26th August;

c. Recognises that one of the greatest threats to the NHS is privatisation of the provision of services which puts profit before people and erodes the open, accountable and democratic nature of this public service;

d. Therefore notes with alarm the secret negotiations currently taking place between the EU and the USA to create a Transatlantic Trade and Investment Partnership (TTIP) backed up by Investor-State Dispute Settlements (ISDS) which give corporations legal protection for their profits and powers to sue governments that threaten their interests;

e. Believes that TTIP could cause ill health, by undermining labour rights, which would affect pay and conditions, and by downgrading EU standards on food, farming and the environment;

f. Therefore believes that promises to exclude the NHS from TTIP, or to use courts rather than secret ISDS tribunals to enforce it, are insufficient and that any government concerned about the health and well-being of the population should be pursuing trade deals which protect human rights and the environment rather than corporate profits, here and internationally;

g. Will send copies of this motion to the Minister for Trade and Industry and all Sheffield MPs.