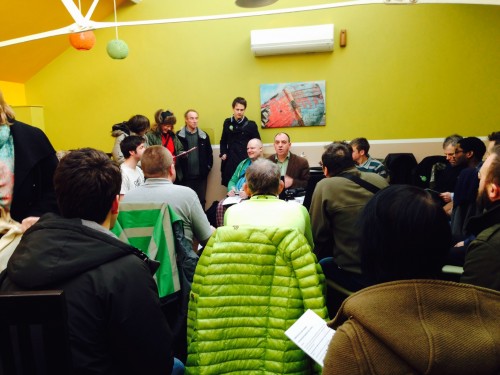 Wow another record breaking turnout at the Sheffield Central Ward Mass Canvass, 29 people turned up from as far afield as Huddersfield, Leeds and Kent!!

We had a brilliant Young(er) Greens turn out, with about 10 of them giving targeted newsletters out and talking to the students in and around their flats at the Forge, Boston St.

We had lots of interesting conversations, made lots of new contacts and we hope you all had a good time, certainly people did not seem to want to leave at the end and stayed in the upstairs area in Amigos Restaurant for some time after the canvassing had finished.

“Thank you so much to those people who came, some from so far away, and we look forwards to seeing you (and many others) again soon.” Said Central Coordinator Gill Black.

Please get in touch if you want to join one of our leafleting or canvassing teams and be a part of this exciting Election Campaign.

Can you help Jillian’s campaign to be elected as the first Green MP in the North of England?