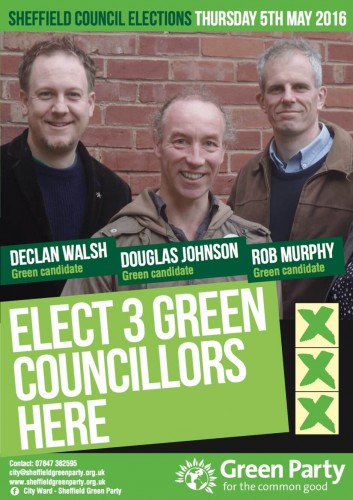 Rob Murphy has been part of the Green councillor team in Central Ward for 8 years. “I am committed to making Sheffield a better place to live, work and visit. Our policies on transport, health and housing can do that.”

Declan Walsh has worked in the NHS, volunteered with charities and is involved in local cooperatives. “I want to support voluntary, cooperative and community groups. More Green Councillors will mean a more positive, accountable voice for Sheffield people.”

Douglas Johnson lives in Kelham Island and works as a legal caseworker for local solicitors. “I want to use my skills on the Council to improve people’s lives. Small practical changes can make a big difference.”

Last year the majority was just 44 votes in the old Central ward which included nearly all of the new City ward. More Green Councillors will make a big difference.