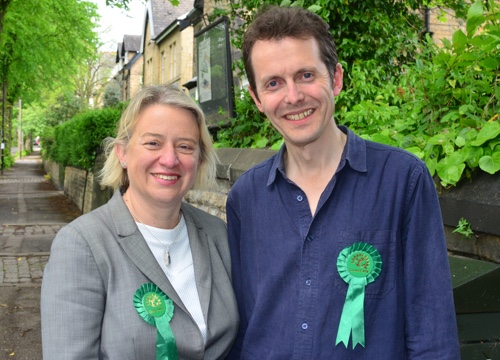 The Sheffield Green Party is today announcing that Rob Unwin has been selected by party members as their candidate for the upcoming Council by-election in Nether Edge and Sharrow.

Speaking after his selection, Rob commented:

“I am delighted to accept my party’s nomination to be the Green Party candidate in the upcoming Nether Edge and Sharrow Council by-election. I would like to thank the party members for selecting me, and my fellow candidates for a good contest.

“I look forward to running a strong, committed, and positive campaign. As a local community activist, I would relish the opportunity to represent Nether Edge and Sharrow on the City Council and to add to the growing body of Green Party representatives in Sheffield.

“I have been an active campaigner in the area for many years, working to improve our local community through successful campaigns such as getting a new zebra crossing and speed camera in Sharrow, renovating a local pocket park, getting community cricket nets repaired, housing issues, and many other local issues.

“But until June 9th I am completely focused on campaigning to elect the North’s first Green Party MP – Natalie Bennett, who has a great chance of winning the Sheffield Central constituency in the upcoming General Election.”

“Rob Unwin did a huge amount to support myself and Cllr Rob Murphy when I was a Councillor covering Highfield, Sharrow and parts of Nether Edge. He helped us keep in touch with local people by knocking on doors, dealing with problems and campaigning for improvements. He would be able to continue this work and do even more as a city Councillor.”

Hi Rob
Heard you speak at the Nether Edge hustings last night.
Very impressed.
You were the strongest candidate.
You have my vote (was going to vote Lib Dem, have decided that would be a wasted vote). Shame about the distraction of the cricket nets.
Please can you explain the ‘bubble wrap’ example you made.
Well done.
Joe Dey
PS Hope you get in on Thursday
Also there’s a typo above on spelling of address

Thank you Joe for your kind words. I used the bubble wrap to try and illustrate the scale of the estimated funding required to save the 200 or so threatened, but saveable trees, compared with the entirety of the SCC/Amey Contract. So the entire contract is £2 Billion (represented by 2000 bubbles – each bubble being £1 million) and the mid range cost of saving 200 trees requiring ‘large’ engineering works (according to Julie Dore) is £75K each x 200 = £15 million (represented by 15 bubbles). However STAG’s independent arborists think that the cost could be as low as £2250 per tree x 200 = £450k (represented by half a bubble). The true cost is likely to be in between the two estimates.