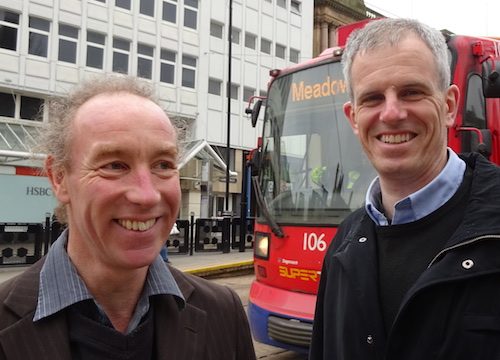 Devolution was on the agenda at October’s council meeting, after the final collapse of the Sheffield City Region devolution deal. Rob Murphy’s motion called instead for closer links and devolution for Yorkshire but that a final decision on Yorkshire devolution should only be made after a Yorkshire-wide referendum.

Rob asked the Council, “do we go into future devolution negotiations with a white rose or a white flag?”

The LibDems had the first motion on the agenda and chose the second of these options. Their motion supported attempts to keep the SCR devolution on life support even after it has died a death. Naturally, the Labour group opposed both motions and substituted their own, somewhat rambling, amendment hoping that it would all work out all right somehow. Cllr Jack Scott was clear that he thought Yorkshire devolution was “the wrong thing for Sheffield.” Labour ‘noted’ – without challenge – that the Government minister said he did not want Yorkshire devolution and that the mayoral election was due to go ahead anyway.

As Rob said, only the Greens were the real party of opposition.

As our motion came after the Labour and LibDem motions, there was still no time to debate it, despite the arguments over new arrangements for council meetings.

Labour also managed to avoid any questions from Opposition councillors by filibustering to the 8pm deadline by asking for repeated recorded votes. Each of these took the form of a roll-call since the electronic voting system was not working. Our proposal to replace the system with one fit for broadcasting would have solved that.

One small success was the Council’s agreement to restore the order of motions on the agenda. Labour’s changes at the previous meeting meant that they would always get to choose the first two debates. This has now been replaced with a fairer system similar to the one on place previously. This formula allows a Green motion to be debated first at the December meeting but stops us putting any motions at all in November.

However, I had filed an amendment,

to delete the words “(as revised on 6th September 2017)” which have the effect of restricting opposition parties from submitting motions, in breach of the constitution, which the Monitoring Officer advises has not changed.

As the Labour group refused to agree to this, I had to raise it in the meeting. I spoke briefly to note our discontent at Labour’s “gerrymandering the constitution.” Unfortunately, what I hoped to be a short speech was interrupted not only by the Lord Mayor but also by the Leader of the council and the Labour Whip, who appeared unhappy with what I was saying.

Rules of procedure are important because they lay the ground-rules for debate and decision-making. Unfortunately, the Administration’s official view is that the constitution has not changed; it is just different to what it was before because it was suspended.

Back on the main motions, we discussed cuts to policing and the impact of austerity on life expectancy. As Greens, we are strongly critical of the austerity favoured to greater or lesser degree by Conservatives, Labour and LibDems. Bizarrely, whilst stating that police forces are reaching a breaking point, the Labour group praised extra resources for their top policing priority – tackling off-road biking. I appreciate it is genuinely a serious annoyance in some neighbourhoods and was the personal experience of the proposer but, personally, I would have thought the recent spate of stabbings in the city centre merited some extra police input.

We supported Labour’s motion on the impact of austerity on life expectancy. The LibDems disagreed that austerity was the biggest factor. Labour’s motion – unusually – proposed a course of preventative action on “adverse childhood experiences.” We therefore proposed an amendment to get the council to recognise it had itself closed Surestart centres and community nurseries in the most disadvantaged areas of Sheffield.

Back at the beginning of the meeting, there were tributes to the late Bill Michie, the former councillor (1970-83) and MP for Sheffield Heeley (1983-2001). He was credited with campaigning for policies such as opening Red Tape Studios (kick-starting the Cultural Industries Quarter) and the cheap bus fares policy.

There were petitions asking the council to tackle anti-social behaviour in Firth Park and safety at Victoria Quays after two tragic deaths. A further petition accused Cllr Bryan Lodge of giving “categorically false” information over health and safety breaches after Amey and one of their contractors (Acorn) had been served notices of contravention by the Health and Safety Executive.

There were questions on devolution, fracking and child abuse. Further questions were about trees and the mileage of roads yet to be resurfaced. Part of the delay was explained by Cllr Lodge as being that Amey’s contact with Aggregate Industries “had reached an end” and that a new company was taking over.

The petitioner at September’s meeting about the Rohingya asked why there had been no action by the council to remove the Freedom of the city from Aung San Suu Kyi. This is apparently to come to November’s meeting.

One interesting question came from Russell Johnson. Noting that the council had not yet congratulated Cllr Alison Teal and Cllr Magid Magid for their recent nominations for national awards, he asked whether the council would do so specifically. The Leader of the Council replied that “of course, she would congratulate any councillor … in general … for their contribution in public life.”