The last Full Council meeting before Christmas had an end-of-term air about it. There were Christmas chocolates, a collection for charity and a non-qualified teacher struggling to control a class of unruly children, even with the Chief Executive and Monitoring Officer acting as teaching assistants. Even those in the public gallery came very close to being ordered to sit out in the corridor for noisy behaviour.

Public questions this time covered the lack of democracy, the attempt to send Cllr Alison Teal to prison, air pollution, flaws in the planning process, wheelchair spaces on buses, closure of the Minor Injuries Unit and repairs to the Old Town Hall.

Martin Phipps asked about the air pollution impact of council plans to widen the Inner Ring Road from two lanes to three.  Cllr Scott denied this was a road-widening scheme. Jenny Carpenter asked about progress on an ethical procurement policy that had been promised in 2014 (now promised ‘soon’).  Peter Garbutt asked why the council was spending time debating national topics it had no control over.  Richard Davis asked about the accuracy of information about Amey’s health and safety infringements. Annie Taverner asked whether we had got beyond the days of the miners’ strike when masked officers would attack protesting miners.

When asked about the reputation of the city in the ongoing trees debacle and selling off the Central Library, the answer of Cllr Julie Dore was – inexplicably – that “most cities are envious of being in our position.”

There was a dignified and thoughtful petition from Graham Jones talking about real work a group of residents had done in Pitsmoor to inform people about the dangers of air pollution and what they could do.  They had collected signatures by talking to people at school gates and in doctors’ surgeries. The vast majority were concerned and respectful.  Graham stressed the importance of being informed, constructive and polite.  This lesson was evidently lost on members of the council.

Members Questions is an opportunity for councillors to ask questions and for Cabinet Members to avoid answering them. I asked when we would hear more about commercial interest in the Central Library.  The answer was “shortly.” What councillors did not know at the time was that selected media had already been informed even if councillors hadn’t.

We put amendments to motions opposing the closure of the Minor Injuries Unit and Walk-in centre, on the Council’s moral duty to protect the city’s children, and calling for an end to evictions of council tenants for debts of water rates.  Other householders can’t even be disconnected for non-payment and we think there should be an end to this discrepancy.

Our main motion called for an independent enquiry into the conduct of members of the Administration and Council officers around the council’s application to the High Court to send Cllr Alison Teal to prison.

Unfortunately, senior council officers objected to use of the words “to prison,” claiming they were “inaccurate.” It is indeed an astonishing discovery to find the official, if absurd, position of the council is that it never applied to send Alison to prison at all. 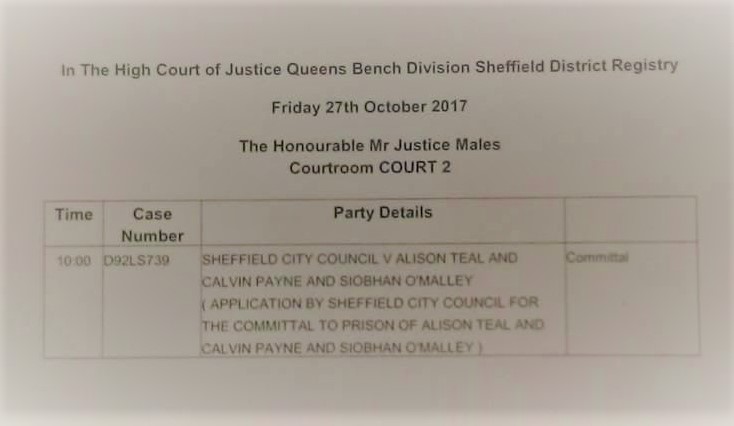 The court listing stating “Application by Sheffield City Council for the committal to prison of Alison Teal, Calvin Payne and Siobhan O’Malley”

Unfortunately, instead of the usual process of giving us advice about formal wording, the officers deleted them and added some extra words of their own.  This is certainly not permitted by the council’s constitution, raising serious questions about the relationship between elected members and paid officers on political matters.

There was more success with our Play Streets motion, inspired by Alison’s successful event on Wake Road in the summer. Whilst Labour couldn’t resist deleting the bulk of our motion, it did result in a positive statement that the Council was now designing a “transparent policy on street play.”

The meeting ended in a sea of increasing chaos with a report on significant changes to the constitution being voted on without proper debate.  The changes will allow the Monitoring Officer to pursue her own complaints against councillors even where no external complaint has been made. The reason this is constitutionally unsound is because the Monitoring Officer has the role of overseeing the complaints process.  I warned the council this makes her both judge and prosecution in her own case.

Both Alison and I (but no other councillors) had to make formal “declarations of interest” for this item, seeing that the Monitoring Officer has now accused both of us of breaching the Councillors protocols.

Finally, the Lord Mayor wished us all a merry Christmas, told us to get home safely and probably hoped some councillors wouldn’t come back next term.

There is One Response to End of term report

Thank you Douglas. It has become very apparent that humour has become a vital element in opposing this travesty of local democracy. Indeed, whilst being savaged by Ms Dore, I couldn’t help bursting into a fit of the giggles. However, I think even Spitting Image would be hard pressed to concoct any more hilarious scenes than the Labour Party at play in full council meeting.