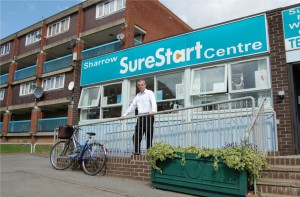 Green councillors have put a motion to full council calling on Labour to start supporting Sure Start.

The Green Party has criticised Labour for not reversing cuts to Sure Start.  The new administration recently announced a realigned budget but this does not include any money for Sure Start.  Subsidies for childcare have been reinstated, but as Sure Start does not provide childcare, it will not benefit.

In fact, the Sure Start “core offer” provides help and advice for young families, much like baby clinics and community midwives and health visitors used to do.  The great thing about Sure Start is that it is based in the community and can bring parents together to help and support each other too.

Cllr Jillian Creasy comments, ” In the local election campaign, Labour activists supported the “Defend Sure Start Campaign” which gathered 5000 signatures and triggered a debate in Full Council.  At that debate, the Labour leader, Julie Dore spoke warmly about what Sure Start meant to her personally and Cllr Jackie Drayton, now the Cabinet Member for Children and Families, criticised the Lib Dems for cutting Sure Start.”

She added, “We pointed out at the time that, unlike the Green Party, Labour had not set aside enough money to save Sure Start. Supporting childcare, especially community nurseries, is valuable, but it won’t help Sure Start. Sure Start workers and families who value the service feel incredibly let down because they believed Labour was supporting them.”

She continued, “Labour has initiated a review of early years services. We hope that this recognises and supports the work done by Sure Start and that any future budget amendments bring it back into line with other services, like child care.”

This council
1. Agrees with the description of Sure Start in the introduction to the current Review of Early Years Services, which states that its primary purpose is “to bring services closer to families, so that they get the advice, help and information they need”;

2. Notes that members of the current administration publicly criticised cuts to Sure Start and supported the Defend Sure Start Campaign, helping to collect signatures for the 5000 strong petition and voting to “applaud and support the campaign”;

3. Acknowledges that the recent budget adjustments have only reduced the cut to childcare, not to Sure Start Childrens’ Centres core purpose provision in the city and that Sure Start has lost out in comparison to other Early Years Services;

4. Will therefore now do everything possible, for instance via the Review of Early Years Services and any future budget adjustments, to support the work of Sure Start Childrens’ Centres to enable them to continue to provide universal, open access, non-threatening, non-stigmatising services for parents most in need.

2 – The Green budget amendment can be viewed here.  “List of amendments” – page 15 onwards.

Relevant extract from the amendment :

(r) agrees with all the parties represented on the Council that support for children in the early years is a worthwhile investment and recognises that Sure Start Children’s Centres also encourage parents to help themselves and each other, contributing to community cohesion;

(s) recognises that early years provision is threatened by:-

(i) withdrawal of subsidies for the child care element of their activity;

(ii) withdrawal of funding for other services provided under their roofs such as breast feeding peer support, citizen’s advice, ESOL; and

(iii) the growing demand due to poverty, unemployment and new arrivals all of which place extra demands on their services;

(t) will therefore not reduce the grant to Sure Start this year;

21. will also undertake a thorough review of the structure and work of the Multi Agency Support Teams to determine if there is any overlap with Sure Start and create a more efficient and streamlined service in which most families get the support they need from a front line community based provider;

£805,000 was set aside to pay for this in the budget amendment– see financial analysis on page 19.

Its simple enough to find out – ask Surestart. Have they or have they not had their budget increased by the council? I suspect not looking at the comments of the Labour party in the Star today but no matter how much they screech and wail about it – the fact remains they misled people (not for the first time too) over it before the election. They have no shame