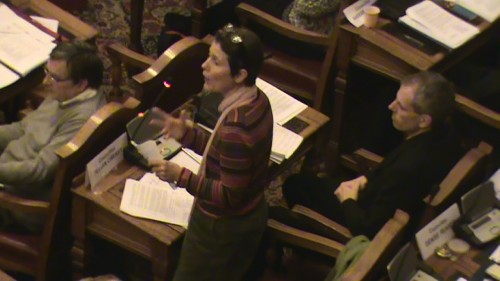 Here is a brief overview of the Full Council meeting on 2nd July. The full agenda can be found here.

– there was a petition and questions about G4S (see Cllr Rob Murphy’s Motion 15); also about contracting out adult social care; but the main item was a 12,000 signature petition calling for safety measures on Normanton Hill. All parties spoke, supporting the measures outlined by the administration. Rob Murphy made a well-received speech extending the issue to the number of people killed and injured nationally: if these were public transport accidents there would be an outcry, but somehow speeding in a private car is not seen as totally unacceptable.

Break followed by eulogies to the 12 councillors who have left or lost their seats.

– any warmth and unity generated by the above rapidly obliterated as questions degenerated into defensive point scoring.

6. Representation on committees – names being added and changed as new year begins.

8. Report from Health Scrutiny Board on Congenital Heart Disease nodded through.

Some of these are good, of course, but others we don’t agree with – for instance the call to “give local authorities greater control over fracking and address the inadequate (compensation) payments …”.  Our position is that we are completely against fracking. Cllr Creasy made a speech agreeing that national policies are damaging Sheffield and the country as a whole … but doubting that a Labour government will reverse the process especially as environmental pressures add to economic woes; and regretting that the administration continues to debate national policy in the council chamber rather than providing any clues about what it intends to do at local level to meet these challenges.

10. Cllr Ben Curran (Labour) motion pledging the council not to use any workfare placements.

Greens VOTED FOR the Labour motion (and AGAINST the LD amendment)

Greens VOTED FOR Labour amendment (in parts) which replaced the LD motion.

13. Cllr Harry Harpham (Labour) calling for an inquiry into the policing at Orgreave.

Greens VOTED FOR the Labour motion (and against the LD amendment)

Greens VOTED AGAINST the eventual motion, except for clauses supporting better links with Leeds and Manchester and a city centre station if HS2 does go ahead. Green Party policy is in favour of investment in the rail network, but would prefer to see capacity increased through more local network investment. HS2 will be beyond the reach of all but the wealthiest travellers. 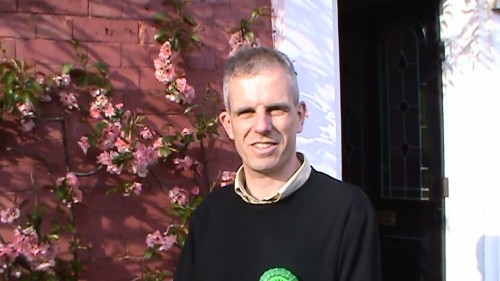 We tried to get this moved up the agenda so it could be passed while the G4S campaigners were still in the chamber – but all except one had gone by the end of Item 4. It was seconded by Labour and PASSED UNANIMOUSLY.

16. Cllr Steve Wilson (Labour) supporting the commemoration for the centenary of WW1

There were LD and Labour amendments.

This problem with fracking has gotten away from what’s important.
THose people that suffer as a result of fracking do so for each and every one of us. Amazing figures. Fuel supplies keep us fed, keep us dressed, and most importnatly keep us well behaved. The main threat from fuel supplies being interrupted, wouldn’t be from the economic turmoil if it was mild or food shortages or other disasters if it was bad. It would be the immmediate threat to the souls of yobs who would immediately take to the streets. If anyone wonders why the people in large corporations and the government consience things like fracking you have only to look into the dead eyes of Sean Mercer. And if that’s too much reality, just play Fallout for a couple of hours to see what a world without fuel would be like.
Read some trashy pulp post-apocalypse novels if you can stand the rude bits. and too see what an economic collapse would look like watch Doomsday Preppers while simultaneously trying to feed yourself of £5 a week!
I have recently come out with numerous technologies for making fracking massively safer. My new organiazation will be involved in many projects such as this. I also hope to replace many of the country’s training courses for the long term unemployed.